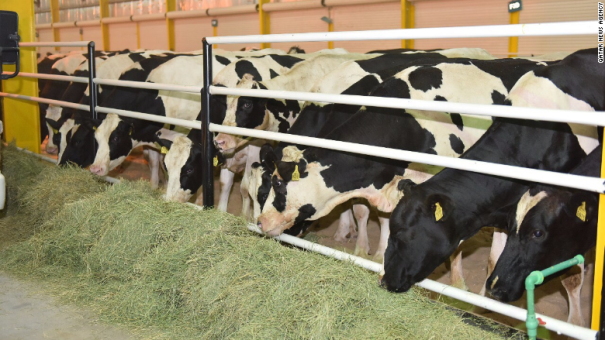 I swear I’m not making this up!  The idea of cows in Qatar would normally be preposterous given Qatar’s six months of brutally hot and dry summer.  Camels and sheep, ok, but cows- that’s impossible!

But the cows are coming to Qatar, so the  Qataris can drink really fresh milk. Baladna Farms in Qatar has built special cow sheds with temperature control.

In June 2017, an economic blockade of  Qatar was initiated by  Saudi Arabia, Egypt, Bahrain and UAE)  and agricultural products.   I have discussed this in prior blogs. Qatar really has only a small agricultural industry, well until recently!

In many ways, Qatar is pushing back, with increased trade with other countries including Iran, Turkey and Morocco. Plus,  they are now in the dairy industry, as shown in the video below.

It has to cost a lot to  maintain air conditioned structures in the middle of the desert with the summer day time temperature well over 100 degrees.  Airlifting cows has got to cost a fortune.  The news media stated the first two deliveries were 230 cows using Boeing 777 Cargo planes.   The goal in to have 4,000 cows in Qatar by mid-September.

It is certain that Qatar has turned this economic blockage into an economic windfall for Qatar’s company, Power International Holdings.  Having enormous gas resources to generate cheap electricity for the air conditioned sheds really helps.

Saudi Arabia new Crown Prince thought he could push around Qatar through economic measures.   Qatar is not only rejecting the 13 demands of Saudi Arabia, but pushing back big time, by restoring full diplomatic relations with Iran.