The US economy was strong in 2017.  Trump’s claim that two million new jobs were added, is right.   Of course,  job growth was good leading up to his inauguration, so he shouldn’t be taking credit for the entire year.

What’s not right, is that the economy was terrible under Obama, and he somehow turned things around.  It was a terrible economy in the last year of Bush’s administration, and aggressive action by both Bush and Obama helped the recovery.  I just go by the Bureau of Labor Statistics, to make my point. 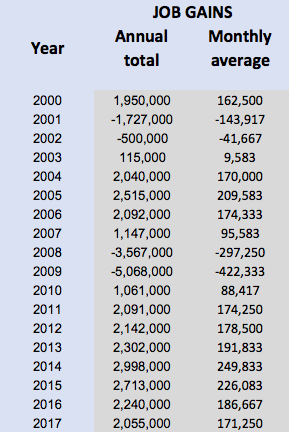 It took time for our economy to recover, as there was only a 1 million job gain in 2010.   But,  our economy has proven to be much more resilient than economists were predicting in 2007 to 2009.   The December 2017 labor statistics just came out with 148,000 new jobs, well below the 190,000 estimate.  The stock market continued its rally, based on the concept of a slowing economy  discourages the Fed’s program of gradual rate hikes.  Or another words, some bad news is actually good news to the stock market, just so long as it isn’t terrible news.

I’ve included one link as posted in Yahoo – Finance, entitled “Challenge for Trump: Job Growth is Slowing”  which adds a bit of reality to the whole story.  We likely attributed too much to actions of an administration, as the factors influencing growth (good or bad) may take years to develop.  The housing bubble was at least seven years in the making (includes both the Clinton and Bush administrations).  Also, an unemployment of 4.1% is considered a good number, and attempts to stimulate the economy further puts pressure on wage growth.

So, the chief concern is that inflation will increase more rapidly than wages, so many workers will feel  their spending power reduced.  Not good for retail, and ultimately this could lead to a recession.   In this case, the reduced corporate tax rate will help in reducing debt, not expanding businesses.   So, Wall Street may prosper at least in the short term, as Main Street suffers.