At 7:00 pm everyday in many cities in Europe, people go out on their balconies and clap in honor to the medical professionals and others who are manning the frontlines.  Many have lost long time colleagues.   I decided to name three heroes out of so many who we all are depending on to help us through this crisis.

Dr. Li Wenliang is both a hero and a victim of Covid-19.  From Wikipedia:

“Li Wenliang (Chinese: 李文亮; pinyin: Lǐ Wénliàng; 12 October 1986 – 7 February 2020) was a Chinese ophthalmologist who worked at Wuhan Central Hospital. Li warned his colleagues on 30 December 2019 about a possible outbreak of an illness that resembled severe acute respiratory syndrome (SARS), later identified as COVID-19. He became a whistleblower when his warnings were later shared publicly. On 3 January 2020, Wuhan police summoned and admonished him for “making false comments on the Internet”. Li returned to work and later contracted the virus from an infected patient (who had been originally treated for glaucoma). He died from the disease on 7 February 2020, at age 33. A subsequent Chinese official inquiry exonerated him and the Communist Party of China formally offered a “solemn apology” to his family and revoked its admonishment of him.”

What made an opthamologist (eye doctor) get involved in a virus epidemic?    He could have felt his job was over once he treated the eye problem, but he didn’t,  He knew he had to share what he had learned.   It was that simple.  He was a brave doctor and undoubtedly saved lives by  informing other doctors via social media.

Since Dr. Li’s  death,   Li Wenliang’s Weibo wall (similar to Facebook)  has been filled with personal messages.   “They speak to him like they know him, calling him brother, uncle, doctor, hero, comrade, martyr, friend.” The Chinese write to him on his wall as if he is still alive and with them.  (see links below).

Another hero is Dr.  Ai Fen,  Director of Emergency Services at the Wuhan General Hospital.    She used social media also to spread the word that a virus identified as the SARS virus was infecting patients.  She says she is not a whistleblower, but she supplied the whistle.

On 30 December, after seeing several patients with flu-like symptoms and resistant to usual treatment methods, Ai received the lab results of one case, which contained the word: “Sars coronavirus.” Ai, reading the report several times, says she broke out into a cold sweat.  She circled the words Sars, took a photo and sent it to a former medical school classmate, now a doctor at another hospital in Wuhan. By that evening, the photo had spread throughout medical circles in Wuhan, where it was also shared by Li Wenliang, becoming the first piece of evidence of the outbreak.

That night Ai said she received a message from her hospital saying information about this mysterious disease should not be arbitrarily released in order to avoid causing panic. Two days later, she told the magazine, she was summoned by the head of the hospital’s disciplinary inspection committee and reprimanded for “spreading rumours” and “harming stability”. 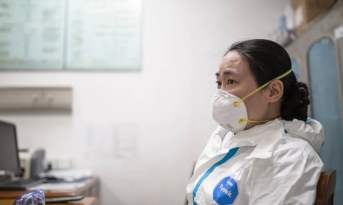 Fortunately, she did not contract the Covid-19 virus.   I believe long after the Covid-19 virus is over,  people in China will remember these doctors and others, who help sound the alarm when authorities were resisting the truth about Covid-19 virus.  The government of China is repressive, but they can’t control both the human spirit and the will of medical professionals to share what they know over the internet.

The third hero is Captain Brett Crozier.   The following is from Wikipedia.  “Crozier was captain of Theodore Roosevelt, then deployed in the Pacific, on March 24, 2020, when three members of the crew tested positive for COVID-19. The next day, eight sailors were infected, and within a few days it was “dozens.”   (Note:  The  exponential  growth of Covid-19 had  already occurred  before  March  24  as  it  takes  time  for  symptoms  to  appear).

The sailors became ill after more than two weeks at sea. The initial cases were airlifted to a military hospital. Theodore Roosevelt was ordered to Guam, where she docked on March 27, and all 4,865 aboard were ordered to be tested for the virus. About 100 affected sailors were offloaded, and the rest of the crew remained on board. Crozier wanted to have most of the crew immediately taken ashore, saying it was impossible to prevent the spread of the virus in the close quarters of the ship. However, his superior, Rear Admiral Stuart P. Baker, believed that to be impractical and too drastic.

On March 30, Crozier emailed a four-page memorandum to 10 Navy officers. Three were admirals in his chain of command, including his immediate commander Rear Admiral Baker, Admiral John Aquilino, the commander of the Pacific Fleet and Vice Admiral DeWolfe Miller III, commander of naval air forces in the Pacific. Crozier copied the message to seven other captains, five of whom were on board the Roosevelt and two who were executive assistants to the admirals. Crozier did not email Vice Admiral William R. Merz, who was higher than Baker in Crozier’s chain of command. In the memorandum, Crozier pleaded for authorization to have most of the crew evacuated and quarantined ashore, citing the impossibility of following CDC recommendations on social distancing and quarantine procedures on the Theodore Roosevelt, a ship more crowded than the cruise ship Diamond Princess infected earlier.  On March 31, the letter was leaked to the San Francisco Chronicle, which published it.  On April 1, the Navy ordered the aircraft carrier evacuated, with a skeleton crew to remain aboard to maintain the nuclear reactor, the fire-fighting equipment, and the galley.

On April 2, Crozier was relieved of command by acting Secretary of the Navy Thomas Modly…At a Pentagon news conference on April 3, Modly said that Crozier had “raised alarm bells unnecessarily” and showed “extremely poor judgment.” Modly mischaracterized the distribution list of the memorandum, inaccurately claiming that Crozier had copied 20 to 30 other people; Crozier in fact sent the memo to 10 officers.”

Captain Crozier is on shore leave, and his case is still under review.  My opinion is simple – he saved lives the best way he could.  There are 678 seamen who tested positive, and I am certain they would like to see Captain Crozier re-instated.

Under normal circumstances, the actions of Dr. Li Wenliang, Dr. Ai Fen and Captain Brett Crozier might seem a bit extreme.  But there was nothing normal about the circumstances, and their actions in acting against convention or authorities were absolutely justified.

The president blasted Crozier’s decision to write a letter to Navy leaders pleading for help as men on his ship fell sick with the coronavirus. “I thought it was terrible what he did. To write a letter? This isn’t a class on literature,” Trump said. Later, he said he might get involved in the decision to dismiss Captain Crozier.

The Guardian: Hero who told the truth’: Chinese rage over coronavirus death of whistleblower doctor