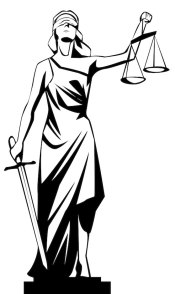 “I think the whole Manafort trial is very sad, when you look at what’s going on there. I think it’s a very sad day for our country,”  Donald Trump’s statement.   He went on to say, “He happens to be a very good person. And I think it’s very sad what they’ve done to Paul Manafort.”

Paul Manafort is accused of more than lying.  He is on trial for tax evasion, which is stealing from the federal government.   Millions of Americans each year, obey the law and report their income and assets.   Paul Manafort did not.  He cheated the government for years. He is also charged with bank fraud.  He made fraudulent claims when applying for loans.   A short list of the charges against Manafort is provided at the bottom of the page.

The “they” refers to Special Counsel Mueller’s team.   The “they” works within the US Department of Justice with many FBI agents.  Lady justice wears a blindfold, because justice is applied equally, regardless of other characteristics such as  race, political views, or wealth.  If convicted, this is a clear demonstration that the Mueller team is not conducting a witch hunt.    Manafort may be found innocent on some of the charges because the charges were not proven beyond a reasonable doubt.

It’s would be a sad day for the country, when people who are ripping off our country are not convicted.  They are ripping off every honest tax payer.     It would be an extremely sad and troubling day, if Trump decides to pardon Manafort.

Catching criminals and convicting them in a fair trial,  makes our country great.   In other countries, you can buy your way our of a conviction.   The “they”  (DOJ and FBI) are doing their jobs.   I would feel just the same, if a Democrat or Republican was on trial.

But, you can bet Trump would be jumping for joy if the person being charged had any connection to Hillary Clinton.

The “counts” are usually because Manafort is accused of the same violation over multiple years.

In an indictment unveiled in February against Manafort and his former business partner, Rick Gates, the special counsel laid out what it described as a years-long “tax scheme” intended to lower Manafort’s tax bills by hiding his income from U.S. authorities.

Manafort worked for years in the 2000s as a consultant for former Ukraine President Viktor Yanukovych’s pro-Russian Party of Regions. The tens of millions of dollars he earned for this work were put in foreign accounts, and Manafort used that money to fund a lavish lifestyle primarily through international wire transfers, Mueller alleges.

Manafort is accused of failing to report this income on his income tax returns, and falsely claiming he had no authority over those foreign accounts.

From 2011 to 2014, Manafort allegedly failed to file foreign bank account reports, known as FBARs, with the Treasury Department to disclose his control over his overseas accounts.

This is purely a semantics problem.  The verb “to collude” is not a standard legal term.   The lawyers understand this,  and know what Mueller is looking at the criminal act of conspiring with foreign entities, obviously Russian agents. So, if one simply substitutes conspiracy for collusion, then yes, we are likely getting close to charges of  conspiracy with those close to Trump’s campaign.

I believe there are more criminal  indictments to come.  It is both ill advised, and premature to begin impeachment proceedings against President Trump.

There is more legal  hairsplitting between a “target” of an investigation and a “subject” of one.   Neither one is pretty as follows:

Donald Trump is the subject of the investigation and not the target of one.  He may be getting closer every day to being a target.

The White House continues to slam the news media,  FBI agents and the Department of Justice.   Exactly how far President Trump is willing to go to defend himself, and close family members is still hard to say.   It has been well established that Donald Trump, Jr.,  Jared Kushner and Paul Manafort attended a meeting with Russian agents in the Trump tower on June 9, 2016.

I believe Attorney General Jeff Sessions made an outstanding decision to recuse himself from the Mueller investigation.   I believe Deputy AG Rod Rosenstein’s selection of Robert Mueller to head the Russian investigation was excellent.  I am very impressed with FBI Director,  Christopher Wray (Trump’s nominated director) and hope that he is able to rise above partisan attacks from Congress.

The investigation is getting complicated.   Mueller has assembled what many consider, the most experienced career  attorneys and FBI agents, to complete the investigation.   White collar crimes, take a long time to litigate because there are teams of attorneys available for those charged with crimes.

The news media is doing a good job of getting the facts as they evolve.  I continue to rely on Wikipedia’s summary, which has assembled one of the best summary of the investigation and its results.   One has to distinguish between the real news reporting,  which recently is the  Manafort trial,  and the commentary which surround it.

There is definitely more to come.

Normally,  criminal investigations do not list every lawyer and FBI agent assigned to the case.  However, congressional leaders,  particularly Republicans in the House, have relentlessly subpoenaed thousands of documents in their attack on the Mueller investigation, to help the president and related campaign officials.

Wow.  What a mess!  What was going on in the last couple of weeks of the elections – if people knew, Trump would have lost for sure.

It started with the Russian influence in the US elections was a “made up story”  by the “fake news media” or the Democrats,  to explain why they lost.  Then 13 Russians were indicted by the Grand Jury and big names in the Trump campaign are either headed for trial (Paul Manafort) or have pleaded guilty (Michael Flynn,  Rick Gates and George Papadopoulos).    A lot more is coming in the Russian probe.

No country should ever be allowed to influence the US elections.    The best chance for criminal justice and truth is with the Mueller investigation.

The Stormy Daniels story changes depending on how much hard evidence the prosecutors have, and how much Trump feels that Cohen might flip.   Another words, this saga has evolved from some rogue attorney, who felt so honor bond to Donald Trump, to pay $130,000 out of his own funds, to shut up Stormy Daniels, to part of a legal agreement (note attorney-client privilege) to fix problems for Donald Trump as part of retainer fees.

Calm and precise Jeff Toobin, legal commentator for CNN, summed it up nicely, “How stupid does he think we are?”  meaning of course Trump.

It isn’t the FBI or the Department of Justice that has caused a problem for Trump, but the president.

As his associates get caught,  they’re flipping.  The indictments and convictions will depend on a massive amount of information, not available to the public, including financial records, bank statements,  emails, and other documents.

O, what a tangled web we weave when first we practise to deceive!
Walter Scott

I’m leaving off the usual links, except for the Wikipedia, which is the best factual summary I could find.