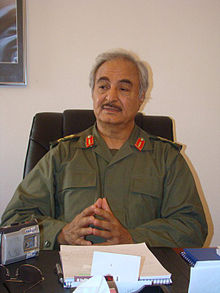 On March 2, 2015,  Khalfa Haftar was named as the chief of the army for the Tobruk based government.

A link to a brief biography of Khalfa Haftar  is provided in the links below. Initially, he was a close ally of Gaddafi.  As stated in the link:

Like other members of the Free Unionist Officers (the junta that toppled the monarchy), Haftar was a secularist and a Nasserist.  He was a member of the Revolutionary Command Council which governed Libya in the immediate aftermath of the coup. Haftar later became Gaddafi’s military chief of staff.  In the late 1980s, Haftar commanded Libyan forces during the Chadian–Libyan conflict, which ended in defeat for Libya.

By 1986, Haffar had attained the rank of colonel, and was then the chief officer in command of Gaddafi’s military forces in Chad in the Chadian–Libyan conflict. During the war, in which the Libyan forces were either captured or driven back across the border, Haftar and 600-700 of his men were captured as prisoners of war, and incarcerated in 1987 after their defeat in the Ouadi Doum air raid.[17] Shortly after this disastrous battle, Gaddafi disavowed Haftar and the other Libyan prisoners of war who were captured by Chad. One possible contributing factor to Gaddafi’s repudiation of Haftar and of other captured prisoners of war may have been the fact that Gaddafi had earlier signed an agreement to withdraw all Libyan forces from Chad, and Haftar’s operations inside of Chad had been in violation of this agreement.[18][19] Another possible reason given for Gaddafi’s abandonment of Haftar was the potential that Haftar might return to Libya as a hero and thus pose a threat to Gaddafi’s rule itself.[12] In any event, Gaddafi’s repudiation clearly served to embitter Haftar towards Gaddafi.

In 1986 and 1987 the Government of Chad accused Libya of using toxic gas and napalm against central government forces and against rebel forces. Libya may have used mustard gas delivered in bombs by AN-26 aircraft in final phases of the war against Chad in September 1987. The wind blew the agent back onto the Libyan forces.

Gaddafi demanded Haftar’s soldiers be returned to Libya, but the Americans arranged for them to fly to Zaire instead. There, half of his soldiers decided to return to Libya. By 1988, Haftar had aligned himself with the National Front for the Salvation of Libya, a U.S. supported opposition group.  When U.S. financial aid to Zaire was not forthcoming, Zaire expelled the remainder to Kenya.[19] Kenya only provided temporary residence, and the American CIA negotiated a settlement around 1990, enabling Heftar and 300 of his soldiers to move to the United States under the U.S. refugee programme.

In March 1996, Haftar took part in a failed uprising against Gaddafi in the mountains of eastern Libya, before returning to the U.S.Haftar moved to suburban Virginia outside Washington, D.C., living in Falls Church until 2007. He then moved to Vienna, Virginia.

In 2011, Haftar return to Libya to support the rebellion against Gaddafi.

— Spoiler to UN  Unification Efforts (My subtitle,  not Wikipedia)

As of August 2016, Haftar has refused to support the new United Nations Security Council endorsed Government of National Accord, which has led the United States and allies to believe he is jeopardizing the stability of Libya. The United Arab Emirates and Egypt continue to support Haftar.[49] Middle East Eye has reported that British, French, U.S. and United Arab Emirates air forces have assisted Haftar’s forces, after analysing leaked air traffic control recordings.[50][51]

In November 2016, Haftar made a second trip to Russia to meet with the Foreign Minister Sergei Lavrov and Defense Minister Sergey Shoygu. It was reported that while he was seeking weapons and Russia’s backing, Russia was holding off pending the new Trump Administration. On 26 December, it was reported that Russia had thrown its weight behind Haftar, saying he must have a role in the leadership of Libya.

Haftar was likely seen as Washington’s inside man in Libya in 2011, as he spent 21 years in the US, likely working for the CIA or related organizations  in Virginia.   Yet, he is probably seen today as a leader most likely to impede unification efforts, leading to an increase the presence of ISIS and other radical groups.

There are many splinter groups besides the Tobruk and Tripoli “camps” seeking to control parts of Libya. There are two governmental authorities in Tripoli, the General National Congress (GNC) and the General National Accord (GNA) government.  The EU, US and the United Nations all back the GNA government, but this has really never been completely  formed.  Thus, Libya remains a very divided and unstable country.

One can understand how the Tobruk government would naturally align themselves with Saudi Arabia, Egypt,  UAE  and Bahrain and cut off diplomatic relations with Qatar.  Yemen has also joined in the cutting of diplomatic relations with Qatar.  If Yemen wants to greatly escalate the conflict, it could close the Straits of Bab el-Mandeb, essentially closing Qatar’s exports through the Suez canal.  It could do the same to Libya.   It would do this only with the blessing of Saudi Arabia, and its new  Crown Prince Mohammed bin Salman.

The division of Libya into east and west administrative areas coincide with the  historical coastal regions of of Cyrenaica (includes Benghazi)  and Tripolitania.    The ancient history of Libya is discussed in the links below.   I hope some day to visit Cyrene and other historical cities such as Sabratha in Libya.

The Wikipedia link on the second civil war beginning in 2014, is given below:

Wikipedia:  Government of National Accord