In preparation for the posting on the isolation of  Qatar,  I found one news item particularly bizarre- the “eastern government”  of Libya  based in Tobruk,  had gone along with Saudi Arabia, and cut off diplomatic relations with Qatar.    There is no eastern Libya, but the eastern part of Libya is being administered by a government in Tobruk.   Normally, there is  only one internationally recognized head of state and legislative body.    Why would a small break away capital, like Tobruk even want to get involved in the isolation of Qatar led by the Saudis?   I think I have the answer. 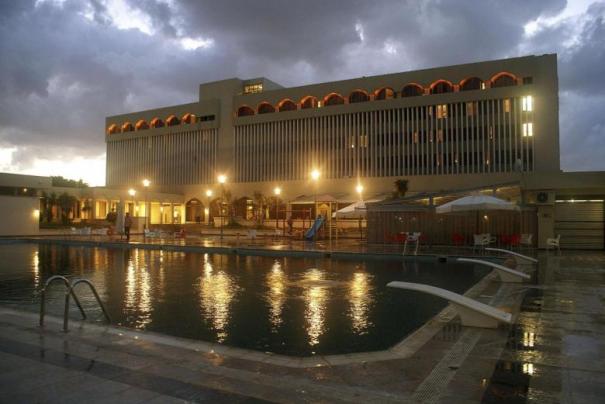 A general view of the Dar al Salam, a five-star hotel being used by members of the House of Representatives, in Tobruk September 28, 2014. REUTERS/Stringer

Nothing is normal in Libya.  At least, in the last 3 years, what happens doesn’t seem normal or  logical to outsiders.  The civil war was fought, presumably, to allow for the Libyans to form a democratically elected government.     Since June 2014, two Libyan capitals exist – the east side  (Tobruk)  and west side (Tripoli) governments.  Many consider there are now three governmental authorities, two in Tripoli, (GNC and GNA) and one in Tobruk.   This is not counting many militant groups, including ISIS which control parts of Libya.

The UN through its special envoy to unite the country.  Some countries recognize Tobruk as the legitimate government of Libya, while others recognize Tripoli.  A link is provided below from Wikipedia providing a very good summary of the breakup of Libya and the recognition of various countries.    There has been no formal division of the country.  As one can see from the map below, Tobruk borders Egypt.  On the  western side, Tunisia is on the border, with Algeria further to the south. 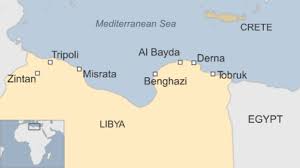 There was a tremendous celebration of the new freedoms which came at the end of the Libyan Civil War.  The first Civil War lasted 9 months, and ended in October 2011 with the death of Gaddafi.  However, it was far easier to make war against the Gaddafi regime, than to create a new government among the various rivals.   This is a period of failed opportunity to create a unified government, and a return to open civil war in Libya.  It is a pattern often seen when an all controlling tyrannical regime is forced out of office.

Pro-Gaddafi support contributed to the unrest in parts of Libya.  In reaction, Libya government enacted harsh measures against pro-Gaddafi loyalists.  Per Wikipedia:

Gaddafi loyalism after the Libyan Civil War refers to sympathetic sentiment towards the overthrown government of Muammar Gaddafi, who was killed in October 2011. It has been responsible for some of the ongoing postwar violence in Libya, though the degree of its involvement has been disputed in a number of instances. Sympathy for Gaddafi and his fallen government is viewed highly negatively by current Libyan authorities—both the legal government and extralegal militias—and parts of general society in postwar Libya, and even accusations of it can provoke harsh responses. In May 2012, the democratically elected postwar government passed legislation imposing severe penalties for anyone giving favourable publicity to Gaddafi, his family, their regime or ideas, as well as anything denigrating the new government and its institutions or otherwise judged to be damaging to public morale. Derisively called tahloob (“algae”) by anti-Gaddafi Libyans,  suspected loyalists have faced strong persecution following the war. Perhaps 7,000 loyalist soldiers, as well as civilians accused of support for Gaddafi are being held in government prisons. Amnesty International has reported large scale torture and other mistreatment and executions, of those perceived as enemies of the new government.

Reports and rumours of organised pro-Gaddafi activity have persisted since the war’s end. The Libyan Popular National Movement was organised in exile on 15 February 2012 (the first anniversary of the protests that led to the civil war) by former officials in the Gaddafi government. The party, banned from participating in Libyan elections, may have also cultivated links with armed pro-Gaddafi groups in Libya. Statements from the party sometimes appear on websites affiliated with the so-called “Green Resistance” (after the sole colour of Gaddafi’s flag), a term sometimes used by sympathisers to refer to supposed pro-Gaddafi militant groups.

The anticipated  steps to transition to a democratic government are discussed in Wikipedia:

On July 7, 2012, the National Transitional Council, in power since the Libyan Civil War, supervised democratic elections for a 200-member General National Congress to replace the Council.[1] The assembly was to choose a prime minister and organize parliamentary elections in 2013.  A process to write a constitution was also to be determined. Unrest driven by armed militias, ethnic minority and radical groups undermined the process and the government for the years following the overthrowing of Muammar Gaddafi. While internal apathy towards democratic reforms slowed the process, external bodies such as the European Union were still pressing for the establishment of a national dialogue to build consensus for the drafting of a new constitution to take place before the end of 2014. Parliamentary elections were scheduled to be held on June 25, 2014 in a move aimed at stabilizing the country and quelling the unrest.

The transition to a unified government based in Tripoli, certainly looked like it was succeeding in 2012-2013.   However,  outside players were quickly gaining a foothold in the new Tripoli government:

The current crisis [as of Oct 2014] was triggered when Islamists lost the elections in June, and militias from Misrata and other towns moved in to besiege the capital. The old parliament says it refuses to recognise the new one because there’s been no formal hand-over ceremony. But with Tripoli and Benghazi controlled by the militias, a hand-over’s hardly possible.Some militias fight largely for the interests of their own town or region. But some are allied to Islamist political groups including the Muslim Brotherhood. “Everybody sang the values of the revolution, but no-one ever sat down and discussed what these values were, and I think this is where we lost a trick,” the new MP Salah Sohbi says. “Some countries backed the Muslim Brotherhood because they thought these guys are OK, they’re Islamists but they are moderate Islamists who have shown a clear distance from the Jihadists. And that is where the mistake happened.”

The second Libyan Civil War is an ongoing conflict among rival groups seeking control of the territory of Libya. The conflict has been mostly between the government of the House of Representatives (HoR) that was elected democratically in 2014, also known as the “Tobruk government” and internationally recognized as the “Libyan government”; and the rival General National Congress (GNC) endorsed government, also called the “National Salvation Government”, based in the capital Tripoli established after Operation Libya Dawn.

This short blog will not attempt to identify all the rival groups  seeking to control Libya.   It is a case of every group financial backing, and control of the oil shipment ports.    The Petroleum Facility Guard has become a private army, according to the National Oil Company, based in Tripoli:

The PFG has become a “private army” for its head, Ibrahim Jadran, according to Mustafa Sanalla, chairman of NOC, which is based in Tripoli. “They have tried to sell oil themselves and then they failed to protect the places they were meant to,” he told The Independent. “We estimate that the activities of the PFG has adversely affected 70 per cent of oil production,” he said. “We are an autonomous body serving Libya rather than either of the governments. The PFG are also meant to be like that, but their only loyalty is to making money.”

The PFG has been blamed for the establishment of ISIL, or at least the damage done to oil storage facilities in Misrata.    Now ISIL has occupied parts of Libya, and is a threat to both Tobrok and Tripoli governments.

A listing of the various rival groups now occupying Libya is provided in the Links section below.