Worst economic conditions since 1973.  Labor participation has never been this low.  Percent of home ownership now at a 10 year low.  Deficits are sky rocketing.  Thank God we got rid of Obama and his screwed up economic plan.

Ok- this is from Fox news,  Sean Hannity, right after Obama’s farewell address.  I’ve embellished on a bit.  This kind of bashing of the economy used to come from financial advisors with doomsday prediction, and then either “Buy my book … ” or “Call me now at 800- ….”  so you will be protected.   Now, it’s all about ratings. 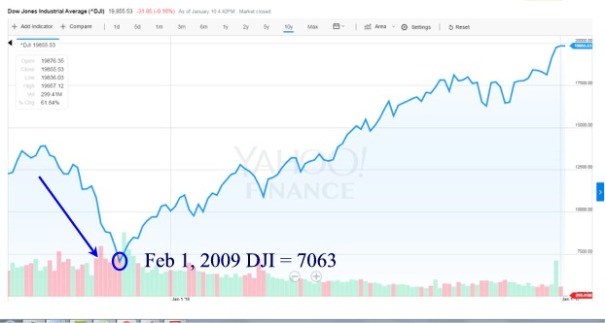 Now, the first big infusion of government money came during Bush’s term.  Conservative Republicans hated this, and stated it was like throwing gasoline on a fire.  But no recovery goes straight up. I count 9 dips in the Dow.

As the economy recovered,  unemployment dropped from 10% to 4.6%. 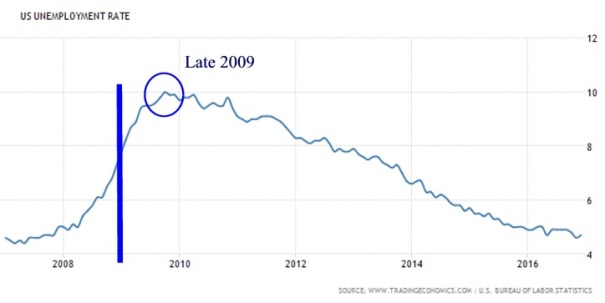 And the housing market recovered as well beginning in late 2009.

Unemployment and housing starts are two of the most closely watched barometers of the US economy.

Average home prices have also increased, and bank requirements for new loans are more difficult than in the period of 2000 to 2008.   This is why, the percentage of home ownership  declined  during Obama’s administration.    Also labor participation declined as baby boomers retired.  Increase enrollment in colleges may also be a factor.

Has the election of Trump made a difference in the economy?  Certainly, the stock market has rallied since November, but it is far too early to tell.

I haven’t mentions the US debt and other important aspects of the economy. To be continued.