“If you had a puddle in your land, (the EPA) called it a lake for the purposes of environmentals.”  Donald Trump,  CPAC, February 23, 2018.  I’m sure he meant environmentalists.  CPAC is the Conservative Political Action Conference.    This claim is  absurd.

I had also wanted to call this dirty water and dirty politics.  It is the collusion of polluters mainly in agricultural states, who allow runoff from farms into streams and wetlands and conservatives within the Republican party.

Scott Pruitt has suspended enforcement of the Clean Water Rule, as enacted in 2015 as of January 31, 2018.   Another words, he made it more difficult for the EPA to do its job – to ensure the US water bodies are free from pollutants and maintain  thriving ecosystems.   He did not abolish the rule, because this requires a formal process.  He will just ignore the rule.

The Clean Water rule was not easy to enact.  It clarified what is meant by the “nation’s water bodies.”  Per the EPA site during the Obama administration:

“Science shows us the most important waters to protect. In developing the Clean Water Rule, the EPA and U.S. Army Corp of Engineers utilized the latest science, including a report summarizing more than 1,200 peer-reviewed, published scientific studies which showed that small streams and wetlands play an important role in the health of larger downstream waterways like rivers and lakes.” 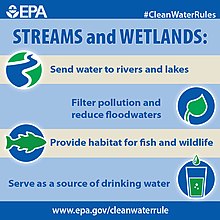 The web address as shown above is no longer active.      See EPA archive website: Why clean water rules matter?

The following is from Wikipedia:

“The rule ensures that Clean Water Act (CWA) programs are more precisely defined and intends to save time and avoid costs and confusion in future implementation of the act. The rule intends to make it is easier to predict what action(s) will be taken by the EPA and what processes companies and other stakeholders may have to undergo for projects and permitting. There are no direct changes to the law under the Clean Water Rule. After analysis, the EPA and Department of the Army found that higher instance of water coverage would produce a 2:1 ratio of benefits to costs in implementation after the final rule. Implementation of the rule will discern any implications for environmental justice communities, though it is clear that “meaningful involvement from minority, low-income, and indigenous populations, as well as other stakeholders, has been a cornerstone of development of the final rule.”

Specific details that have been clarified by the rule as outlined below.

A tributary, or upstream water, must show physical features of flowing water – a bed, bank, and ordinary high water mark – to warrant protection. The rule provides protection for headwaters that have these features and have a significant connection to downstream waters. Adjacent waters are defined by three qualifying circumstances established by the rule. These can include wetlands, ponds, impoundments, and lakes which can impact the chemical, biological or physical integrity of neighboring waters.

All existing exclusions from longstanding agency practices are officially established for the first time. Waters used in normal agricultural, ranching, or silvicultural activities, as well as certain defined ditches, prior converted cropland, and waste treatment systems continue to be excluded.

Before the rule, almost any water could be put through an analysis that remained case-specific, even if it would not be covered under CWA. The rule limits use of case-specific analysis by providing certainty and clarity of protected vs non-protected water. Ultimately the rule saves time and avoids further evaluation and the need to take the case to court.

This is not the way to make America Great Again.

EDF Blog on EPA’s Suspension will set a dangerous precedent