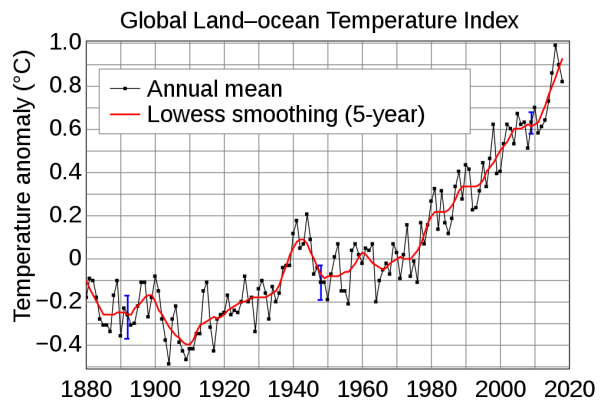 Scientists like to refer this as “climate change” but whatever it is called, it is real, it is worldwide and the consequences of ignoring it or belittling it, are very serious.

I was blown away when I saw this graph on the front page of the New York Times, on February 7, 2019.  I mean the front page of the New York Times is precious territory,  but the editors decided to put this graph at the top left corner, because it tells a very compelling story.   It is from the National Oceanic and Atmospheric  Agency (NOAA) showing the 2018 global temperature is right on trend beginning around 1970.   Look at the last five points, 2014 to 2018, the temperatures are above all others on the chart,  meaning the last 5 years were the hottest ever on our planet.

This temperature increase coincides with increases in worldwide carbon emissions.   It is  distinctly different from the 1880 to 1930’s, random ups and downs.  Global warming is a factor in extreme weather events including the blistering cold snap in the Midwest, the extreme heat wave in Australia, hurricanes in Puerto Rico, Florida, and the gulf coast states,  prolong dry conditions in California promoting forest fires and expansion of deserts causing famine in Africa.

It is real,  It is bad,  And we lack leadership at the highest levels of our government.  Trump will pull out of Paris Accords, and did not say one word about climate change in the State of the Union address.

I’ve said this before, and I’ll say it again.  Global warming doesn’t cause hurricanes to form.  Ok.  It is a contributing factor in turning a tropical storm into a hurricane.   I live in Miami, and I know the difference.  Hurricanes can totally destroy a house and are deadly.    I was in Miami when Hurricane Andrew hit in August 1992 and I saw the destruction.

I was very  glad to see climate change listed along with terrorism as one of the major threats to US security as reported by National Security Director, Dan Coats in the Foreward of the 2018 assessment (see links) as follows:

Challenges from urbanization and migration will persist, while the effects of air pollution,inadequate water, and climate change on human health and livelihood will become more noticeable. Domestic policy responses to such issues will become more difficult—especially for democracies—as public become less trusting of authoritative information sources.

Environment and Climate Change: The impacts of the long-term trends toward a warming climate, more air pollution, biodiversity loss, and water scarcity are likely to fuel economic and social discontent—and possibly upheaval—through 2018.  The past 115 years have been the warmest period in the history of modern civilization … (page 16) ,

The report does not go into detailed as this is a highly condensed summary of immediate threats to the US.  It is clear from the report that water and food shortages increase the risk of unrest in parts of the world.   I fear these trouble spots will end up like Syria and Libya,  prolong proxy wars.    President Obama was ridiculed on Fox News suggesting that climate change could be a worse peril than terrorism to our country.

Our increasing environment problems becomes more noticeable – that’s right, if we take the trouble to see what’s happening.   Of course, when a hurricane comes and demolishes your dream beachfront home,  it is pretty difficult to ignore.

Just as I was ready to hit the publish button,  I discovered another news story, in which scientists consider our warming gulf coast waters make it likely that hurricanes will intensify at a more rapid rate (see Miami Herald story).   This gives everyone less time to evacuate, and is particularly bad for the less mobile (poor people, elderly, hospitalized folks) to get out of harm’s way.

To reiterate, it was great to see the New York Times break out of the publishing norms,  and put the graph front and center.  Of course, they followed up with pictures of melting glaciers in China, wildfires in Paradise, California,  Hurricane Florence in Florida, and a dried up section of the Rhine in Germany.  All of these were from 2018. And they put it all online so anyone could read their story.  Great work.  But,  there is more needed than just public awareness.

It’s official: 2018 was the fourth warmest year on record

10 signs of a warming planet

Why Is the Cold Weather So Extreme if the Earth Is Warming?

The announcement will be made at 3:00 pm today (June 1, 2017).    It has been widely rumored that Trump will pull out of the Accords.  The Agreement was a very major step forward in acceptance of a global problem.

The radical exit is the one supported by conservative groups,  such as the Heritage group.  The coal companies such as Peabody and Cloud Peak Coal, want Trump not to exit the Accords, as this puts the EU in a leadership role in setting targets.

A final option (“death in the legislature” option)  is for Trump to  state the Accord is really a treaty, which must be ratified by 2/3 of the Senate.  With the Republican controlled Senate, the treaty would be “dead on arrival.”   This would change the issue to one of Obama overstepping his authority, and Trump might just go for it.

The Paris Agreement is more of an “agreement in principal”  rather than a treaty, as it lacks any penalties for countries who do not reduce their carbon emissions. It is an important first step as it is an  agreement of mutual commitment  to a global problem.   As it is structured,  the US could stay in the Accords,  do nothing to reduce these emissions and not be sanctioned by the UN.

Obama signed the agreement as an Executive Order.  Trump can legally exit the agreement, but has to comply with the set schedule if he wants to do the normal exit.

I predict that many countries will be looking more at the “non-exit” or “non-compliance” option, which means climate change is something leaders of the countries are concerned about, but  nobody does much about it.

This will leave the US as the only one of 193 countries to exit the Accord.

No short term solutions.   There is no single action the US can do to defeat ISIL.   Eliminating ISIL or similar groups with the jihadist philosophy is likely impossible, in that it only takes a couple of fanatics to pull off an act of terrorism.   What Obama and the rest are focused on, is helping Iraq and Syria take back their control of cities and cutting off access to resources.  This is what I concluded after listening to President Obama on Sunday, December 6 and Susan Rice on CNN, which aired on the same day.  What began, at least for the US, under George Bush, and continued under Obama, will continue to be a problem for the next president as well.

Susan Rice is President Obama’s National Security Advisor.   The recent terrorist attacks in Paris and San Bernadino, CA made this interview very timely.  She was interviewed by Fareed Zacharia, as part of his normal weekly program, CNN-GPS.

The lack of US troops in Syria is being construed as a) a lack of leadership, lacking in resolve,    b) not being in touch with reality, delusional  (Lou Dobbs prefers the latter) or  c)  ignorant of the facts.   The strategy is actually a result of being very informed of the facts, on a daily basis.   McCain has blasted Obama for not sending in large numbers of troops into Syria, saying the US has not plan.  Truth is we don’t have his plan.

Susan  Rice was asked if the Obama administration underestimated the force of ISIL.   She sidestepped the question by responding that  since mid-2014, the Obama administration has been considered ISIL a major threat to both Iraq and Syria, and  steps have been taken to destroy their organization.   But, it’s clear, Obama underestimated the threat.  The infamous “Junior Varsity  comment” occurred in January 2014, shortly after Fallujah fell in Iraq.     This year, ISIL has  shown to be incredibly resourceful and organized  in establishing new bases in other countries.

Rice did not want the interview to focus on  prior mistakes.  The list of mistakes is long and goes back George Bush’s administration.  But, it is not likely in late 2013 and early 2014, there was much the Obama administration could have done.

The question of whether we are winning or losing the war against terrorism, is another one that Susan Rice chose not to directly answer.  There are a number of scorecards.  Since San Bernadino, there is a real gut feel that we’re losing to terrorism.   It particularly hit home, when they were showing the stockpiles of arms and bullets these two terrorists had accumulated.  But, this is not my scorecard.  I see it more as the cities under their control and the growth of the organization world wide.  A major defeat occurred when Boko Haram pledge allegiance to ISIL.

I agree with President Obama, that putting troops in Syria, beyond the small special op’s group, would be counter-productive.   It would be seen as an invasion force by both the Syrian  government and ISIL, and recast the fight against terrorism as a fight against the Muslim world, which we must avoid at all costs.  There are 1.6 billion Muslims in this world,  obviously outnumbering us 5 to 1.   We have far more latitude in Iraq, and may be able to increase are presence there- but it must be a multinational presence.

Susan Rice in her interview, was asked if the world is becoming less stable place to live.  This clearly open the discussion to go beyond ISIL.  She responded to the many initiatives taken by the Obama administration to lower tensions and help solve world problems.  The Ebola epidemic is one success.   The Iran deal is another one- yet it is way to early to know if this succeeds in the end.   The end of a policy of containment of Cuba, is another initiative to lower tensions- and hopefully create a more durable relationship with our neighbor.   A lot of crises which are hardly resolved, including Libya were not discussed.   Conflicts with Russia are a colossal regional  destabilizing threat, and Rice simply stated that the US is looking for common ground.

I was thinking how much opposition the Obama administration has gotten with each of these initiatives.  I remember how much flack Obama got when he sent 3,000 troops to Africa to help with the Ebola crisis in the transport of supplies.   Fox News commentators acted like Obama was insane- saying there will be 3,000 infected troops coming back to the US,  and pretty soon the numbers will be be 3 million or 30 million Americans with Ebola.   Ebola is a case where international cooperation produced incredible success.

Most of the really important efforts will take enormous  international cooperation.  This includes the international climate change accords, likely to come from the Paris summit.   It’s a tough road ahead, to find unity abroad, while there is so much division in the US.